Yid with Lid, via Gateway Pundit, reports that the alleged non-partisan 501(c)3 tax exempt organization known as Media Matters has blamed the Jewish Lobby (meaning AIPAC) for the current crisis in Egypt. 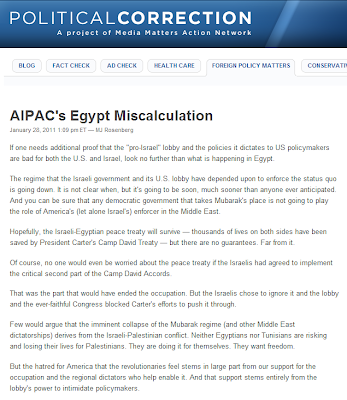 Media Matters is partially funded by left-wing sugar daddy George Soro$, who once said he felt no guilt about aiding Nazis in the confiscation of property from Jews, as he told Steve Kroft from 60 Minutes.

Kroft: “My understanding is that you went … went out, in fact, and helped in the confiscation of property from the Jews.”

Kroft: “I mean, that’s—that sounds like an experience that would send lots of people to the psychiatric couch for many, many years. Was it difficult?”

Soros: “Not, not at all. Not at all. Maybe as a child you don’t … you don’t see the connection. But it was—it created no—no problem at all.”

Kroft: “No feeling of guilt?”

One order of business the GOP House should do is investigate and remove the non-profit tax exemption for this Leftist organisation.
Posted by MaroonedinMarin at 6:21 PM