In another example of liberal hate speech, a play at the Missoula (Montana) Children's Theatre had a scene added in which Sarah Palin was beheaded, to the amusement of the liberals in the audience (Washington Examiner).

The play, which was presented at the Missoula Children's Theater in Missoula, Montana on January 23, was a production of Gilbert and Sullivan's 'The Mikado.' But the play's director decided at the last minute to add a bit of 'humor' to the production by including a scene which called for the beheading of Sarah Palin.

Although the production was presented before a predominantly liberal crowd, the scene prompted the following letter to the editor in the local newspaper, the Missoulian:

First I would like to compliment you and the entire staff of “The Mikado” on the beautiful sets, costuming and professional performance we experienced on Sunday, Jan. 23. However, I must call you on something that was inserted into the play which I am almost positive was not in the original book.

The comments made in such a cavalier and oh-so-humorous way were uncalled for. Now, I realize you play to a mostly liberal audience in Missoula and so, I am sure, felt comfortable in your calling for the beheading of Sarah Palin. I am painfully aware that most in the audience tittered with laughter and clapped because “no one would miss her” but there were some in your audience who took great offense to this “uncivil tone” about another human being.

We are in the midst of a crisis that took place in Tucson where many started pointing fingers at that horrible right wing with all their hatred and targeting and standing for the second amendment and on and on and on. So, here we are in a lovely play with beautiful voices serenading us and we have to hear that it is okay to call for the killing of Sarah Palin because we don’t like her and no one would miss her. Unbelievable.

As a professional you should be ashamed of yourself, the audience should be ashamed of themselves and I am ashamed of myself for not standing up and leaving at that very moment. I would like to see an apology from you not because I want to hinder free-speech but for the hypocrisy this so clearly shows.

In response, Michael McGill, the executive director of the MCT, issued the following typical liberal non-apology/apology while stating the "act" was removed from the production. 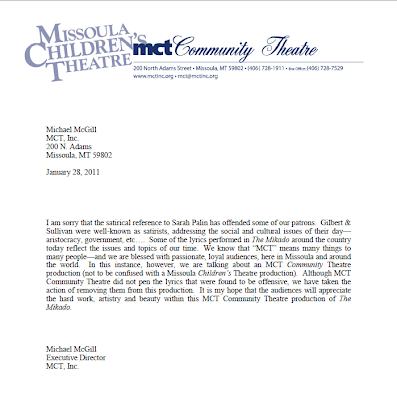 I am sorry that the satirical reference to Sarah Palin has offended some of our patrons. Gilbert & Sullivan were well-known as satirists, addressing the social and cultural issues of their day— aristocracy, government, etc…. Some of the lyrics performed in The Mikado around the country today reflect the issues and topics of our time. We know that “MCT” means many things to many people—and we are blessed with passionate, loyal audiences, here in Missoula and around the world. In this instance, however, we are talking about an MCT Community Theatre production (not to be confused with a Missoula Children’s Theatre production). Although MCT Community Theatre did not pen the lyrics that were found to be offensive, we have taken the action of removing them from this production. It is my hope that the audiences will appreciate the hard work, artistry and beauty within this MCT Community Theatre production of The Mikado.

So when liberals issue death threats, it's called "satire," just like films, books and paintings illustrating the assassination of President George W. Bush was called "art."

Hypocrisy, your name is liberalism!
Posted by MaroonedinMarin at 1:16 PM

I would say this is "unbelievable", but I have seen so much of Liberal hypocrisy that nothing fits that term anymore. They claim civility and bipartisanship, but what they do is nothing like either. "We won", "F*** Bush", "BusHitler", "We have to pass the bill so you know what is in the bill".

The hubris is maddening.

I live in Missoula, Montana and a member of the audience that witnessed a death threats made against Sarah Palin - who as a former Presidential nominee is protected under 18 U.S.C. 871 that mandates an immediate arrest CURT OLDS, the guest director and puppet master of this production of THE MAKIDO.