Insane liberals are using the tragic shooting in Tucson, AZ today to attack Sarah Palin and claim she is an accomplice in the shooting of Democrat Congresswoman Gabrielle Giffords, and the deaths of five.

They're using this map to make the absurd leap that Palin was physically "targeting" the Congresswoman. 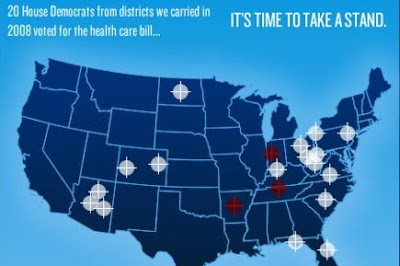 But the Democrat Leadership Council had their own "target" map in 2004, thanks to Verum Serum.

J.D. Hayworth's Democrat opponent in 2006, Harry Mitchell, ran an ad showing Hayworth in the crosshairs of a rifle scope. 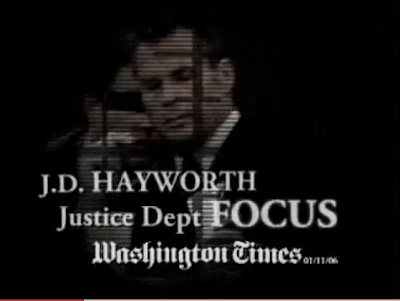 Even the Daily Kos, who is blaming Sarah Palin for the shooting "targeted" Giffords back in 2008. Kevin at HillBuzz got a screenshot of it. 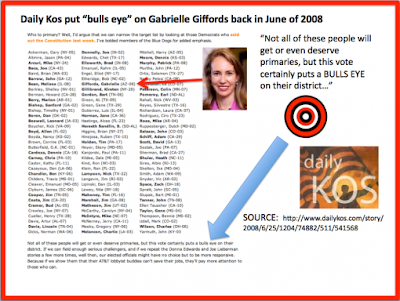 The text at the bottom reads:

Not all of these people will get or even deserve primaries, but this vote certainly puts a bulls eye on their district.

Another Kos kid wrote two days earlier that Giffords was "dead to her," because she voted against Nancy Pelosi.
Sorry libs, your tactic just backfired on you.
According to Stars & Stripes, the Army has no record that the alleged shooter was a member. Jonn at This Ain't Hell also has that info, as well as no info the guy was a Marine as well.
Posted by MaroonedinMarin at 3:12 PM