So the Democrat phonies want to complain about "inflammatory language?" Sarah Palin? The Tea Party? Even though none of them had anything to do with the tragic shooting in Tucson on Sautrday.

It was the work of a nut, Jared Loughner, the next in a long line of nuts like John Hinckley, Mark David Chapman, Lee Harvey Oswald, and others.

More Deomonrats are jumping on the "Lets Blame Conservatives" bandwagon.

Senator Dick Durbin, the disgrace from Illinois, was on CNN yesterday.

“We live in a world of violent images and violent words, but those of us in public life and the journalists who cover us, should be thoughtful in response to this and try to bring down the rhetoric, which I’m afraid has become pervasive in our discussion of political issues. The phrase ‘don’t retreat, reload’ – putting crosshairs on congressional districts as targets – these sorts of things I think invite the kind of toxic rhetoric that can lead unstable people to believe this is an acceptable response.”

Toxic rhetoric? Let me remind this seditious bastard of what escaped from his lips in 2005.
Some of us have long memories, Sen. Turbin.

Rep. Jim Clyburn is another one. You remember, the same Jim Clyburn who is a member of the Congressional Black Caucus, the group who made up the phony allegation that Tea Party members yelled the "n-word" at them as they made their way through the crowd during the run up to the Obamacare vote on March 20th. Clyburn used this accusation to claim Tea Party members were "aiding terrorism."

Brady's bill should be voted down, because "inflammatory language" had nothing to do with the shooting.

If Robert Brady was so concerned about "inflammatory language," where was he during the Bush years (photo montage from Zombie), when "Kill Bush" signs were in the air at so many liberal rallies? Except it wasn't called "inflammatory language," it was called "dissent as the highest form of patriotism." Keep in mind too, that when the immigration battle heated up, some Democrats likened Arizona to Nazi Germany, and liberal open borders advocates regularly labeled Gov. Jan Brewer a Nazi. 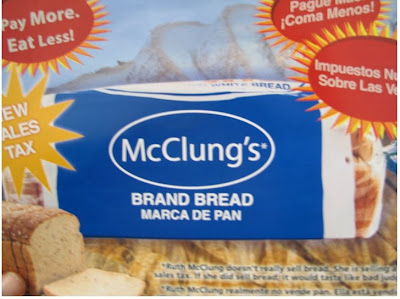 Grijalva is the same clown who called for his own state to be banned, and border security "racist." Never mind that Gijalva was once a member of the racist, separatist group MECHA.

Posted by MaroonedinMarin at 3:40 AM