Vice President "Bite Me," aka Joe "Plugs" Biden, wrote a message the other day and wants my address so that Barack Hussein Obama can send me a thank you note, via his DNC astroturf organization, "Organizing for America" (aka Astroturfing for Obama). 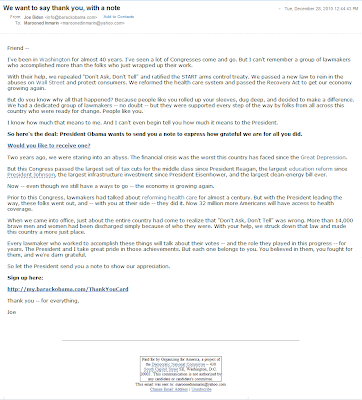 Text below: There's more whoppers in this e-mail than you'd find in a Burger King.

I've been in Washington for almost 40 years. I've seen a lot of Congresses come and go. But I can't remember a group of lawmakers who accomplished more than the folks who just wrapped up their work.

With their help, we repealed "Don't Ask, Don't Tell" and ratified the START arms
control treaty. We passed a new law to rein in the abuses on Wall Street and protect consumers. We reformed the health care system and passed the Recovery Act to get our economy growing again.

But do you know why all that happened? Because people like you rolled up your sleeves, dug deep, and decided to make a difference. We had a dedicated group of lawmakers -- no doubt -- but they were supported every step of the way by folks from all across this country who were ready for change. People like you.

I know how much that means to me. And I can't even begin tell you how much it means to the President.

So here's the deal: President Obama wants to send you a note to express how grateful we are for all you did.

Two years ago, we were staring into an abyss. The financial crisis was the worst this country has faced since the Great Depression.

Now -- even though we still have a ways to go -- the economy is growing again.

Prior to this Congress, lawmakers had talked about reforming health care for almost a century. But with the President leading the way, these folks went out, and -- with you at their side -- they did it. Now 32 million more Americans will have access to health coverage.

When we came into office, just about the entire country had come to realize that "Don't Ask, Don't Tell" was wrong. More than 14,000 brave men and women had been discharged simply because of who they were. With your help, we struck down that law and made this country
a more just place.

Every lawmaker who worked to accomplish these things will talk about their votes -- and the role they played in this progress -- for years. The President and I take great pride in those achievements. But each one belongs to you. You believed in them, you fought for them, and we're darn grateful.

Yeah, what a bunch of lies. All Congress and Obama did was keep President Bush's tax cuts from expiring at midnight tomorrow. Yet, in two years, Bite Me said those tax cuts which are politically expedient now will become evil again when they need liberal votes for re-election in 2012.

Health insurance "reform," (aka Obamacare) was voted in with bribes and backroom deals against the will of the American people. Now, more Americans have seen their insurance premiums skyrocket from this "reform" and the "death panels" that the Regime said was not in the bill, has been added back.

Another lie: gay service members were not blocked from serving in the military under "Don't Ask, Don't Tell," they just weren't allowed to be open about it. This Regime, to appease the radical homosexual lobby, put politics ahead of the best interest of our military by foisting their liberal social experiment upon those who defend this nation, despite internal polling info that indicated trouble if DADT was repealed.

Keep in mind there's not one word about what is being done to keep our military in fighting shape to fight a war against Islamic terrorism, and no talk of victory over these jihadists who attacked and continue to plot attacks against our nation. Just making the military more politically correct from a Regime whose two leaders have no military experience whatsoever.

All that stimulus spending and our economy is in worse shape than when these two clowns came into office.

But hey, who cares about the end result? It's all a big f**kin' deal to Bite Me.
Posted by MaroonedinMarin at 9:56 AM