This is from a Google Cached page on the US Naval Institute website, via FreeRepublic.com. The page where the article appeared is currently not accessible. 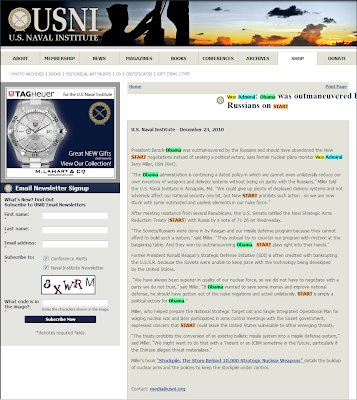 President Barack Obama was outmaneuvered by the Russians and should have abandoned the New START negotiations instead of seeking a political victory, says former nuclear plans monitor Vice Admiral Jerry Miller, USN (Ret).

“The Obama administration is continuing a dated policy in which we cannot even unilaterally reduce our own inventory of weapons and delivery systems without being on parity with the Russians,” Miller told the U.S. Naval Institute in Annapolis, Md. “We could give up plenty of deployed delivery systems and not adversely affect our national security one bit, but New START prohibits such action - so we are now stuck with some outmoded and useless elements in our nuke force.”

After meeting resistance from several Republicans, the U.S. Senate ratified the New Strategic Arms Reduction Treaty (START) with Russia by a vote of 71-26 on Wednesday.

“The Soviets/Russians were done in by Reagan and our missile defense program because they cannot afford to build such a system,” said Miller. “They instead try to counter our program with rhetoric at the bargaining table. And they won by outmaneuvering Obama. START plays right into their hands.”

Obama and the Russians were aided by numerous RINOs, who were more concerned about looking like nice guys instead of doing what is best for America. To think that a mostly Democrat Congress 30 years ago refused to ratify the SALT II treaty, now look how far we've fallen.

The Heritage Foundation has another assessment of how bad the START Treaty is for us.
Posted by MaroonedinMarin at 7:11 AM