Just like last year, the Nevada gangster, "Dingy" Harry Reid, is using the Christmas break to pressure the Senate to ram through the Democrat's socialist agenda....while they still have as much power as they can (Politico). 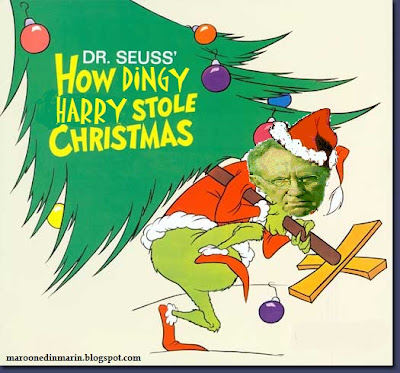 There’s still no clear endgame in sight as Democrats struggle to close out the lame-duck session of Congress in time for Christmas.

The Strategic Arms Reduction Treaty is in limbo, the continuing resolution funding the government is still lingering, a Sept. 11 first responders bill is still on the table and a food safety measure is still awaiting a final vote in the final days of the Democratic majority. In fact, some House aides are not ruling out the possibility of a post-Christmas session to finish the Sept. 11 bill if time runs out this week.

The uncertainty has thrown into serious doubt the one-day schedule the House had planned for the week, and House aides expect the chamber to be in session through Wednesday. The Senate may stay a day longer to finish its work.

...Still, having not passed an appropriations bill all year, Congress is faced with the prospect of a government shutdown if it doesn’t act on a continuing resolution swiftly. The Senate is expected to vote to end debate Tuesday morning on the continuing resolution, Senate Majority Leader Harry Reid’s (D-Nev.) office said. With the government scheduled to shut down by evening that night, the funding measure is taking priority, so the House is expected to vote on it Tuesday, aides say.

But there’s more on Reid’s to-do list before the end of the session, some of which can affect the work of his lower-chamber colleagues.

Such as paying off the casino bosses who forced their employees to the polls to re-elect the crooked Senate Majority Leader, as well as other power grabs?
Posted by MaroonedinMarin at 4:22 AM

Email ThisBlogThis!Share to TwitterShare to FacebookShare to Pinterest
Labels: Culture of Corruption, Reid