More denial from the Obama Regime about Islamofascist terrorists (Politico)

White House press secretary Robert Gibbs says it's unfortunate that some terrorist suspects at Guantanamo Bay need to be held indefinitely without trial.

"Some would be tried in federal courts, as we've seen done in the past. Some would be tried in military commissions, likely spending the rest of their lives in a maximum-security prison that nobody, including terrorists, have ever escaped from. Some, regrettably, will have to be indefinitely detained," Gibbs said in an interview aired Sunday on CNN's "State of the Union," describing Obama's beleaguered plan for closing Guantanamo. 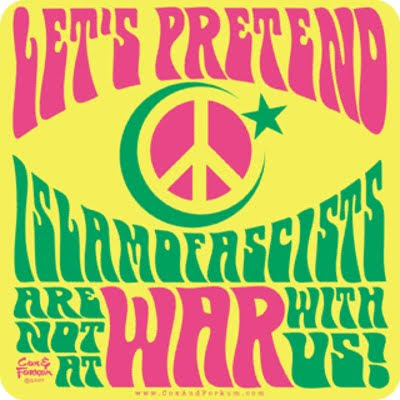 The press secretary quickly sought to clarify his comments by adding, "I say 'regrettably' not because it's a bad thing for - necessarily for them in terms of the fact that they're very dangerous people and we have to make sure that even if we can't prosecute them, we're not putting them back out on the battlefield."

Sure you didn't mean it's a bad thing, Mr. Fibbs! Coming from a Regime that treats journalists who dare to question your boss with contempt, yet you feel sorry for the people who plot to kill Americans.

Posted by MaroonedinMarin at 11:25 AM