Claire McCaskill, one of Obama's Jokers who has rubber stamped his socialist agenda, has become unhinged. 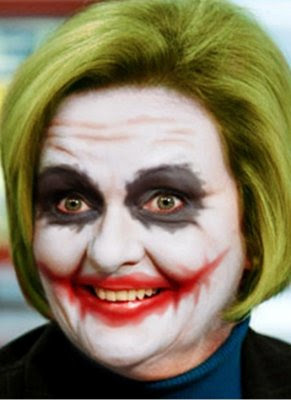 At about 1:40 on the video below, he called on American citizens to "take up pitchforks" against the Republicans in Congress if the Democrats aren't allowed to raise taxes on Americans who create jobs (YouTube, via FreeRepublic).
Um, Claire, for all your phony talk about championing the middle-class, let me remind you that you voted to pass Obamacare, which has raised insurance premiums for working Americans and whose regulations threaten further job growth.

And they call Tea Partiers violent?

2012 is around the corner, Claire.
Posted by MaroonedinMarin at 5:27 AM

The only torches and pitchforks are (figuratively) coming for her in 2012.