The liberal's war against Christine O'Donnell is far from over.

Stories appeared yesterday saying her campaign finances were being investigated by the Feds, after a complaint was filed by the George Soro$ funded CREW (Citizens for Responsibility & Ethics in Washington).

It doesn't help that one of her former campaign workers making these accusations was fired for being a no-show for her job.

O'Donnell called the accusations "thug tactics," and expanded on the allegations in a message which Gateway Pundit posted.

Also posted at GP was a news article from A(O)P (Associated with Obama Press) from yesterday, accompanied by an unflattering photo of O'Donnell. Another A(O)P story this morning uses the same photo. 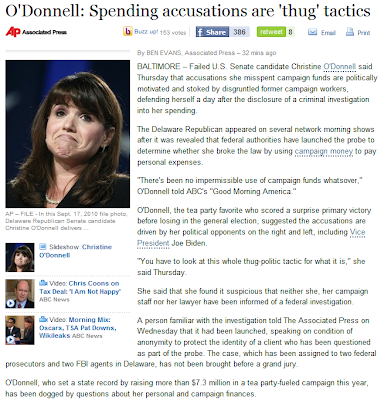 Posted by MaroonedinMarin at 6:12 AM