Lapdog Media Has Obasms Over Obama's Lame Duck "Success," Despite If It's In America's Best Interest

Proving true my claim that the lapdog media (AP, most daily newspapers, and television networks) wake up every morning with the first thought on their minds being "How can I make Dear Leader Obama look great today," they greeted him at a "press conference" with near masturbatory adulation over his lame-duck victories in Congress (Gateway Pundit).

It's even spilled over into what passes as their "reporting." This is today's Washington ComPost online: 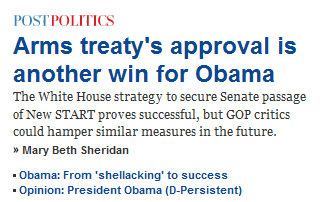 In other words, it's all about Obama. It was the same way when, during the Bush years, the same media gleefully reported against some liberal judge ruling against anti-terror laws or some leaked secret as "a defeat for the Bush Administration." In both cases, the media (and many on both sides of the political class) only look at how something will benefit them, and to hell with how it affects the nation as a whole.

Why don't these self-proclaimed watchdogs ever look out for what is in the best interest of our nation? Is the START Treaty detrimental to our national security? Will repeal of "Don't Ask, Don't Tell" harm military readiness and morale? You wouldn't know that by reading the ComPost, the New York Slimes, or watching MSDNC, ABC, CNN, or CBS.

Because it's all about making "The One" look great. Never mind more people are out of work, terrorists are becoming bolder and plotting more attacks against us, and more people are going to have a not-so Merry Christmas this year.
Posted by MaroonedinMarin at 7:38 AM

Email ThisBlogThis!Share to TwitterShare to FacebookShare to Pinterest
Labels: obamalapdogmedia