Helen Thomas: I Meant What I Said Earlier About Da Joooos

Helen Thomas, aka "Hezbollah Helen," is now saying she stands by her remarks from last May, that Jews should "get the Hell out of Palestine" (Israel). Those comments forced her resignation as member of the White House Press Corps and her early retirement. 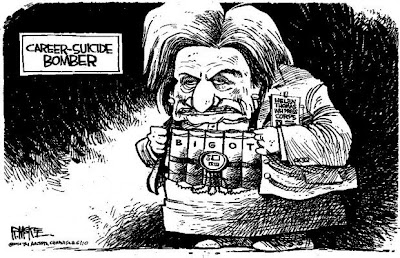 Despite apologizing for her anti-Israel tirade, she's now ratcheting up her anti-Semitic rheotric, after being honored by Islamic organizations like the Hamas front CAIR and others (Kansas City Star).

Helen Thomas said Thursday that she stands by her comments about Israel she made earlier this year that led to her resignation as a national columnist.

And she went further, saying that Zionists control U.S. foreign policy and other institutions. The local Jewish community condemned her remarks.

...Thomas, a longtime White House correspondent who grew up in Detroit as the daughter of Lebanese immigrants, was in Dearborn for a workshop on anti-Arab bias.

In a speech inside a center in Dearborn, she talked about “the whole question of money involved in politics.”

“Congress, the White House and Hollywood, Wall Street are owned by the Zionists (read: Jews). No question, in my opinion,” she said. “They put their money where their mouth is. We’re being pushed into a wrong direction in every way.”

Judging from the above statement, Helen Thomas would probably agree with this sign, which I saw at a pro-Hamas rally in front of the White House in January 2009. 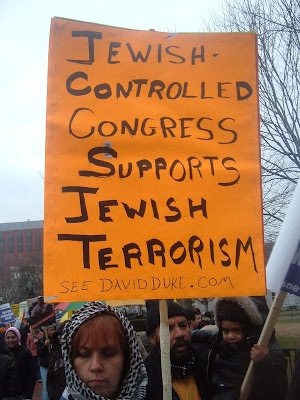 So, is it not a coincidence that Thomas, after being honored by CAIR and all these other groups, is now taking back her earlier apology and engaging in more anti-Semitic sterotypes?

Helen Thomas is also going to be the speaker on December 12 at the Arab American Action Network fundraiser, whose executive director's home was raided by the FBI in September during an investigation into support for terrorism.

Posted by MaroonedinMarin at 3:45 AM