After the last few days of watching the Senate, I'm prompted to ask:
Where is the Republican Leadership and why all the cave-ins to the liberals?
The START to Disarm America Treaty, "Don't Ask, Don't Tell" repeal, the phony "Food Safety" act--these are important issues that shouldn't be shoved through in a lame duck session. But they have been, thanks to several RINOs like pin-up boy Scott Brown, Susan Collins, et al.
You know the GOP cave-in to the liberals is so bad when even the King of the RINOs, Lindsey Grahamnesty, is blasting Senate Republicans for their feckless leadership (RedState).

The Senate GOP is decidedly mushy on many fronts and unwilling for really tough fights except in odd circumstances. The Senate GOP understands that Mike Lee, Rand Paul, Ron Johnson, Pat Toomey, and Marco Rubio are headed to the Senate as reinforcements for Jim DeMint. They are deeply worried because of it.

Why worry? Because the Senate GOP wants to cut deals with the Senate Democrats and they know that just Rand Paul, Mike Lee, and Jim DeMint will be able to force deals much more conservative than the Senate GOP is.

So Senate Republicans decided to roll over on big issues now knowing that next year they will be forced further right than they might be comfortable.

Who's to blame? Let's point the finger at Senate Minority Leader, Mitch McConnell, dubbed here in a great Chris Muir cartoon as "The Cowardly Lion of the Senate." This guy is following in the tradition of eunuchs like former leader Bill Frist and Trent Lott, people not willing to get their hands dirty for the sake of doing what's best for the country. No, instead, it was all about making sure that Republicans looked like nice guys who could get along with their colleagues across the aisle.

Why couldn't McConnell have held out for a better tax deal? Making the Bush Tax Cuts permanent, no added pork to the bill, and if unemployment was to be extended, let's pay for it with the unpaid stimulus funds.

News flash for Mitch McConnell. There was an election in November where the American voter overwhelmingly said they didn't want anymore of this liberal agenda. Apparently, he didn't receive the message.

So perhaps the first agenda in the new Senate is to get a leader who is willing to stand on conservative principles and not be the GOP lapdog to Obama and the gangster, Dingy Harry Reid.

That means Mitch McConnell should be fired as Minority Leader. Either that, or it's time to put out an all-points bulletin for him.... 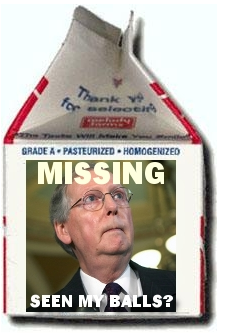