While the Lapdog Media attack Sarah Palin, and employ an army of "fact checkers" to discredit her, they are ignoring a bombshell story of a top fundraiser who has met with the President, as well as our enemies. 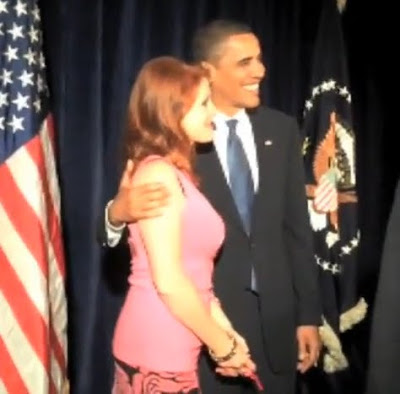 Jodie Evans and Code Pinko, the pro-terrorist, anti-US military group she co-founded with Fidel Castro sympathizer & communist Susie "Medea" Benjamin, went to Afghanistan recently for a "fact finding" mission. But she did more than meet with local women, as reported by Kristinn Taylor and Andrea Shea-King, at Brietbart's Big Government. She met with the members of the regime who sheltered the al-Queda terrorists that launched attacks on America.

Top Obama donor and fundraiser Jodie Evans met with the Taliban in Afghanistan on a recent trip there, according to a report by Jane Fonda of a discussion she had with Evans last month. The meeting with the Taliban took place just weeks before Evans was videotaped directly handing to President Barack Obama a package of information about her trip to Afghanistan at a high dollar fundraiser in San Francisco.

The meeting with the Taliban was kept secret by Evans and her group Code Pink in reports she and the group posted from Kabul and in interviews with the media and bloggers about the trip. Fonda, a close friend of Evans, let the secret meeting slip in
an account of her dinner with Evans at a fundraiser for the Armand Hammer Museum in Los Angeles:

Last Saturday, My dear friends Jodie Evans and Max Palevsky, invited Richard and me to join them at their table at a fundraiser at the Armand Hammer Museum in Westwood. It was a good evening for lots of reasons. I had never been to the museum and definitely want to go back. Clearly it is a courageous place, very cutting edge. Then, too, I saw lots of friends I hadn’t seen in a long time and I sat next to Jodie who told me a little about her recent trip to Afghanistan with an American delegation that included a retired colonel, and member the State Department (Army Reserves Col. (Ret.) and ex-diplomat Ann Wright). While there, she met with people ranging from the brother of President Karzai, Afghan members of Parliament, activists, to warlords and members of the Taliban (emphasis added.) Jodie is co-founder of the peace organization, Code Pink, and always willing to go to any lengths to try and find out what’s really going on. Bottom line: everyone she met with wants the U.S. Military out of their country. ...(M.I.M. note: that conflicts with what Afghan women told Code Pinko, they didn't want our troops to leave) ...They feel our presence there has brought more violence rather than security. Please read a short article she wrote about the trip which is on the Women’s Media Center website.
There is precedent to suspect that Evans is acting as a conduit for the Taliban to Obama. In June, her fellow Code Pink co-founder Medea Benjamin hand carried a letter out of Gaza from the terrorist group Hamas addressed to Obama.
Over the seven years of its existence, Code Pink has acted as propaganda shills for the anti-American governments of Iran’s President Mahmoud Ahmadinejad, Venezuela’s President Hugo Chavez, Bolivia’s President Evo Morales, Cuba’s Castro brothers and Iraq under Saddam Hussein, as well as Middle Eastern terrorist
groups.
Fonda has her own history of working with America’s enemies. During the Vietnam war she visited North Vietnam in 1972 and was photographed manning an anti-aircraft battery used to shoot down American planes. Fonda also recorded propaganda radio broadcasts for the North Vietnamese communists.
In 2007 Code Pink brought Fonda out of protest retirement at a so-called antiwar demonstration held at the Navy Memorial in Washington, D.C. 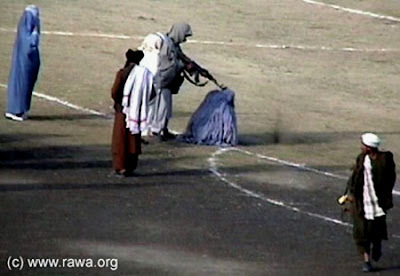 Treatment of women under the Taliban, pre-2001: This is what Jodie Evans, Jane Fonda & Code Pinko want to bring back to the women of Afghanistan.
What was in the package that Evans gave Obama at the San Francisco fundraiser? She describes what she gave Obama in an article at the Huffington Post:
…we were careful to make the package very user and security friendly. It was filled with photos, quotes, thousands of signatures (on a petition against more troops for Afghanistan), a copy of Rethink Afghanistan and our 25-minute interview with Afghan MP Dr. Roshanak Wardak from Wardak Province, who is adamant that the U.S. should not send new troops and rather, must leave.
Evans notes that she gave a similar package to Speaker of the House Nancy Pelosi who was also at the fundraiser being held in her city.
No mention is made by Evans on whether she relayed oral or written messages from the Taliban to Obama. However, it is a strong possibility given Fonda’s revelation and Code Pink’s history.
Code Pink’s image as kooky but well-meaning women committed to peace is belied by their words and actions. At home they work to undermine morale in our soldiers, their families and the American public. Abroad they work with terrorist enemies of
the United States.
And one of Code Pink’s co-founders, Jodie Evans, works with President Obama. Is anyone in our nation’s capital paying attention?

The media, to their great discredit, certainly isn't.
Posted by MaroonedinMarin at 3:54 AM