DAMN THE POLLS!!!!! Full Speed Ahead, Go Out And Vote McCain/Palin Tomorrow!

It's the night before Election Day, 2008. If you're paying attention to Obama's propaganda outfit, the liberal MSM, it's all over. He's supposed to win the election for President tomorrow and make all things right, according to these lapdogs behind a news desk.

Never mind that these same "journalists" have done more work in one day investigating a private citizen (Joe the Plumber) or a Governor (Sarah Palin) than they have in over two years investigating the Democrat nominee for President and his ties to racists, anti-Semites, slum lords, unrepentant anti-American terrorists and other characters of ill repute. It's one thing to be biased, it's another to lie to your audience. Look at the LA Times refusal to release a damning video of Obama toasting a PLO member at a 2003 Jew bash. Omission of facts is, by definition, lying.

This nation faces serious times. A war against an Islamic terrorist enemy hellbent on our destruction and an economy which just needs less government. The question is, who do you trust? A proven leader who has been through the worst humanity had to offer or an inexperienced, untested candidate whose only skill is giving a slick speech and hypnotising people with the feel good words "change" and "hope?"

It's a rare day indeed when have I say that I agree 100% with Hillary Clinton, the only thing Barack Hussein Obama has to show for himself is that he can give a good speech. The times are too serious to entrust to someone who acts like a contestant on American Idol than a legitimate candidate for leader of the free world. 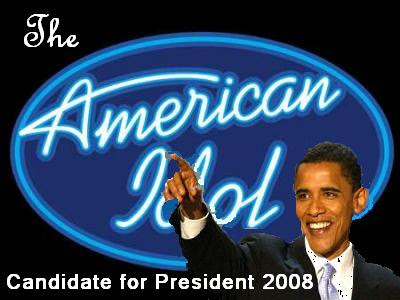 ....What America cannot afford in these serious times
I've heard it said my many that the news media and the polls are meant to do one thing; keep you and I away from the polls by depressing us. Look at the facts. Gallup has That One up by 11. How do they weight the polls? 39% Democrats, 31% Independents, 29% Republicans. Do you think that is an honest reflection of America? I don't think so. Remember also, that polls have also overstated Obama's strength by 7 percent.

We saw the same thing in 2004. Pollsters predicted John Kerry was going to win the 2004 election. The same happened with the exit polling. The McCain camp is reminding us how the exit polls in 2004 stated Kerry would win the Presidency. Thankfully, none of that came to pass, because the only poll that counts is the one you and I cast.

There's no other choice this year but to ignore the polls, pundits and the liberal news media; go out and cast your vote for John McCain and Sarah Palin. Send the liberal media a loud message! Send Chris Matthews and Keith Olbermann home crying in their beer tomorrow night!

Voting third party or staying home is a nothing but a proxy vote for Obama, which will mean socialism, higher unemployment, higher energy costs, loss of liberty and surrender to those who attacked us on September 11, 2001. This nation cannot afford that and your children, grandchildren and mine cannot afford that either.

Vote as if the future of this nation depends on your vote, because it does!
Posted by MaroonedinMarin at 5:04 PM

Email ThisBlogThis!Share to TwitterShare to FacebookShare to Pinterest
Labels: Election08