Attorney, Columnist & New York Times Bestselling Author Ann Coulter has come under a lot of fire lately for comments made about four 9/11 widows in her new book Godless: The Church of Liberalism.

The Hildebeast, Hillary Rotten Clinton issued a statement denouncing Coulter's comments about the widows, known as "The Jersey Girls." Two Democrat lawmakers from New Jersey love free speech so much that they want her book banned in the state. Finally, Advertising Age outdid them all and asked Coulter to "kill herself."

Did Coulter have a valid point how the Left exploits these families losses? Yes she did. However, I think she could have made her point better, instead of saying they "enjoying their husband's deaths." In doing that, she takes herself down to the level of the Left.

Despite my disagreement with what Coulter wrote, I find it ironic to see the hypocrisy of the Democrats and their friends in the mainstream media. For all their outrage at Coulter's criticism of these four 9/11 widows, they were silent when a Democrat website mocked a 9/11 victim.

This was the homepage of Democrats.com on September 26, 2001. 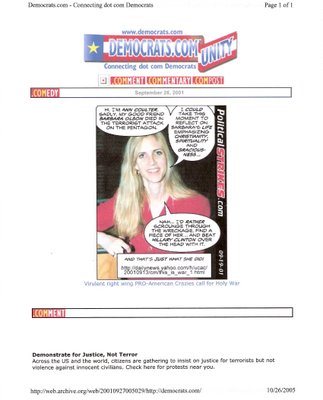 On that day, the website used a photo of Coulter “reminiscing" about conservative author Barbara Olson, who was killed on American Airlines Flight 77. Underneath was the caption “Virulent Right Wing PRO-American Crazies Call for Holy War.”

Democrats.com is run by a bunch of Clintoniods and Gorebots like Bob Fertik, pollster Stanley Greenberg and Greg Simon. Even supposed liberal nice guy Alan Colmes has this extremist website listed in his links on his webpage.

So, while liberals like Colmes join in on Coulter pile on, I wonder when they will find the time to express the same outrage at Democrats.com for mocking someone killed on 9/11.

Good point! I posted a link to this in the comments at stoptheaclu.com.